I wonder if witches use their broomsticks to sweep their houses, or whether they have vacuum cleaners just like everyone else?

photo by Asurnipal
Actually, now I'm thinking about it, I wonder how a flying broom is powered? You never know, witches might know the secret to combating global warming.
Hey, and if brooms fly by magic, rather than by some kind of fuel, then you could probably get a vacuum cleaner to fly, too. A vaccuum cleaner would be much more comfortable to sit on than a broom...

...though I suppose you'd have to be careful not to get the lead caught up in a tree.

Anyway. Brooms. Much cheaper and longer-lasting and more versatile than the most high-tech of vacuum-cleaners. And more soothing to operate, too.

There are quite a few plants called broom. They come from the group called the Genisteae, which you can find more or less all over the world. Lupins, gorse, and laburnum are included in the group, as well, of course, as broom: 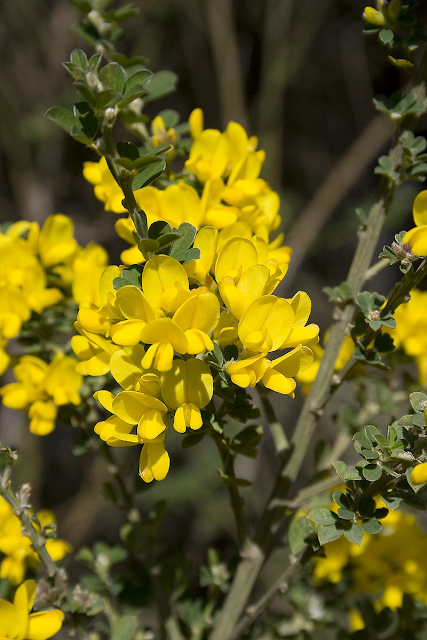 French broom (found in California, apparently). Photo by Calibas
They tend to have long spiky bits that you can use to make, well, brooms.

Spot the Frippet: broom. The Old English form of this word was brōm, which is basically the same word as bramble and comes from a Proto-Indo-European word bherem- which means something like to project, or a point. The word started off meaning the prickly shrub, and took over from besom as the word for a sweeping implement in the 1400s.