Word To Use Today: cupid.

It's Valentine's Day, the day when people define their most intimate relationships in terms of red ribbon, pink hearts, and exophthalmic teddy bears.

Because you're worth it.

So. That Cupid guy with the arrows. Just who does he think he is causing all this trouble, then?

Unfortunately, as with many trouble-makers, no one is sure who Cupid is. Some say he came into existence before male and female were thought of, some say his mother was Venus.

As to who his father was, that's anyone's guess. 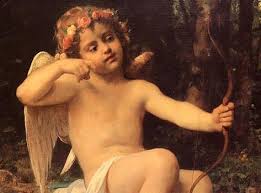 Léon Bazille Perrault's "Cupid's Arrows"
Whoever he is, he seems to have solved the never-growing-up thing, and perhaps it's being a mere child that explains why he's always up to mischief, firing his arrows at people and making them fall in love all over the place.

Even given that, Cupid's occasional habit of firing off his arrows blindfold is totally irresponsible.

As to the arrows Cupid fires, these also are a mystery. Some say he has two types of arrows, sharp ones which cause uncontrollable desire, and blunt ones which cause uncontrollable aversion. There's also a variation on this idea (possibly dreamt up by James I of Scotland, where Cupid has three sorts of arrows: the gold ones for causing a mild crush; the silver for a serious passion; and the steel for eternal love.

Even if you are currently not in Cupid's power, then there are things around called after him. The flower catanache is also called Cupid's dart: That's Clara Bow and her Cupid's bow on the left, there.

Even if you are currently free of Cupid's power, then are you truly free of cupidity? It's basically the same word, though the passion here is usually for possessions or money.

It strikes me that life would be easier if Cupid grew up.

Oh, but it would be so much duller, wouldn't it.

Word To Use Today: Cupid. This word comes from the Latin cupīdō, which means desire.