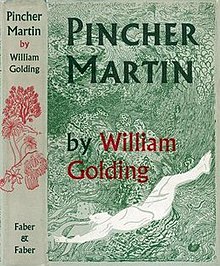 Pincher Martin, a lieutenant on a naval ship, is thrown into the sea when a U boat sinks his ship. His struggle to survive on the small rocky island upon which he finds himself makes up most of the story.

Pincher Martin's strong sense of self-worth demands the reader's attention, although any interest in him as a person is increasingly strained as his memories reveal himself to have been a thoroughly dangerous and unpleasant character.

And then there's the famous nothing-was-as-you-thought last line...

Yes, it's all very modern and Nobel-Prize-For-Literature-Winning.

Still, some of his books are quite short.

Word To Use Today: martin. A martin is a small migratory swallow-type bird, often with a slightly forked tail. It may be so called because it migrates about the time of Martinmas, November 11th...

...except that any sensible martin will be long gone from its breeding grounds by then.