Word To Use Today: vulcanology.

The blood group of Mr Spock, that most famous inhabitant of the planet Vulcan, is T negative. Sadly, this is nothing to do with vulcanology, which is the study of volcanoes.

(By the way, Mr Spock was originally supposed to come from the planet Mars, not the planet Vulcan, but there was a fear that mankind might get to Mars before Star Trek finished being broadcast - which is still possible. Mr Spock's Vulcan wasn't the planet Vulcan which was thought by the French mathematician Urban le Verrier to exist between Mercury and the sun: 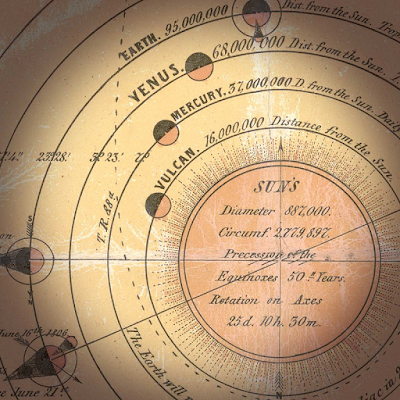 illustration by E Jones and G W Newman
but another, equally non-existent one, which has been said to exist in the triple star system 40 Eridani.)
Anyway, vulcanology. It's usually spelled volcanology...
...but that post wouldn't have been nearly so much fun to write.
Word To Use Today: vulcanology. Vulcan was the Roman god of fire and metal-working and his activities were said to cause earthquakes and volcanic activities. The Latin word for lighting was fulmen, which might be something to do with the name Vulcan, but on the other hand there were loads of similarly-named gods all over the place in the ancient world, and the name could really have come from anywhere.