Word To Use Today: ossicle.

An ossicle is a little bone.

Nearly everyone has some ossicles in their middle ears: 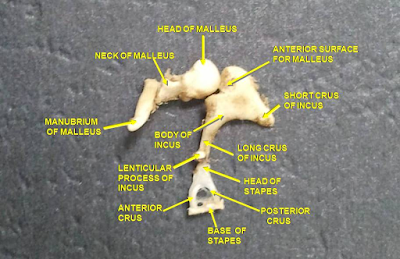 illustration by Anatomist90. (These bones are called the hammer, anvil, and stirrup in English.)

An accessory ossicle isn't one you wear as an earring, but one which isn't found in a majority of people. The most famous example (though it isn't famous at all) is the fabella, which is a tiny bone that, when present, floats at the back of the knee joint. About ten to twenty percent of people have one.

I don't know if I have one, myself, but I wouldn't turn down an accessory ossicle if I had the chance, even if I couldn't wear it in my ear.

Word To Use Today: ossicle. Ossiculum is Latin for little bone. The Latin names for the hammer and anvil in the illustration above mean, er, hammer and anvil. The Latin name for the stirrup had to be made up because the Romans didn't know about stirrups. This word is stapes, and it's probably made up of the words stapia to stand, and pes, foot.