May the force be with you!

This post is written in Galactic Basic. Please forgive the use of Roman Earth Alphabet, but if necessary translation can be made to Galactic Basic Aurebesh using the following chart: 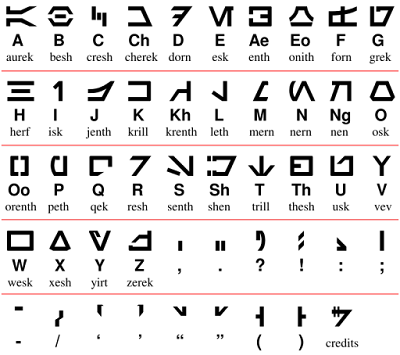 The letters of Aurebesh are based on designs by Joe Johnson used in the original Star Wars trilogy. This original design-work, called Star Wars 76, was developed into a font by Stephen Crane of West End Games.

Google Translate had an Aurebesh translation feature 2015 - 2016, and there are currently several translation facilities available via Google.
Word To Use Today: Aurebesh. This word is formed from the first two letters of the Aurebesh alphabet. In this it is exactly like the word, well, alphabet.