Word Not To Use Today: ophiuchusgender.

If we can accept for the time being that gender defines what turns us on, then to understand this word we obviously need to know what or who Ophiuchus is.

The zodiac group Cancer is said to resemble a crab, and Aquarius a lady carrying a jug of water.

Ophiuchus is said to look like a man ( perhaps the god Apollo, perhaps Aesculapius) wrestling with a snake. 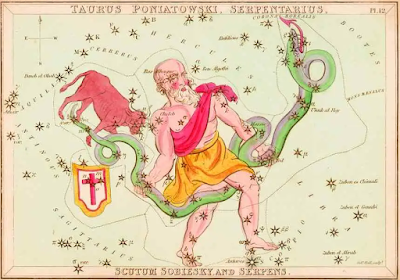 It is very hard to believe that this was not originally a joke.

Anyway, there are those who believe that people born on the days when the sun is rising through the constellation Ophiuchus are ardent, and hungry for knowledge. People who call themselves ophiuchusgender might feel that this forms the basis of their choice of romantic partner, or they might be people who change their preferred choice of partner according to where the sun is rising, and so be ophiuchus-orientated only some of the time.

I'll make just one criticism of this word. When you say it, it sounds as if you're very drunk and trying to say officegender.

Well, nearly all of us have experienced that.

Word Not To Use Today: ophiuchusgender. The Greek word ophioukhos means holding a serpent. Orphis means serpent and ekhein means to hold or keep.