Nuts and Bolts: hearts of oaks.

They are all (as you may have noticed) green with brown sticky bits, so if you're trying to distinguish them then you're going to have to rely on some quite minor feature. But which one to choose?

Well, it depends upon who you are.

The Common Oak (which is actually quite common, at least in Europe) has been so called by English-speaking people for hundreds of years; but scientists call it Quercus robur, which means not common oak at all, but strong oak. 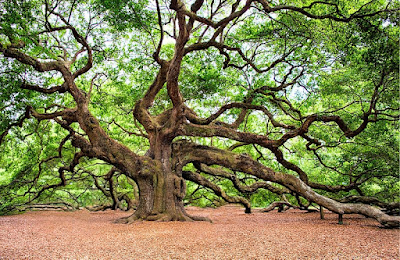 The Sessile Oak (sessile means without stalks, which its acorns indeed haven't) has the scientific name Quercus petraea, of the rocks, presumably because it grows on hills.

The Turkey Oak does indeed come from Southern Europe, but scientists call it Quercus cerris, which has been its name since classical times.

Mirbeck's Oak (presumably introduced or discovered or named by someone called Mirbeck) is Quercus canariensis, which means from the Canary Islands (even though it isn't).

The Bur Oak (which has fuzzy bur-like cups to its large acorns) is to scientists Quercus macrocarpa, the big-fruit oak.

The Water Oak (which has shiny leaves which look as if they have a drop of water on the tip) is Quercus nigra (nigra means black (the trunk is a dark grey); but what non-botanists call the Black Oak is known to scientists as Quercus velutina because the young leaves are velvety.

The Shingle Oak (yes, the wood is used to make roof shingles) is scientifically classified as Quercus imbricaria, the overlapping oak. At least there you can see a connection.

And then at last we come to the White Oak, which the boffins call Quercus alba. Alba means white (the colour of the bark of old trees).

Which is half a relief, and half a disappointment. as far as I'm concerned.

Word To Use Today: oak. Quercus is the Latin name for the Common Oak. The word oak was āc in Old English.