A volta is a dance that involves a lot of energy: 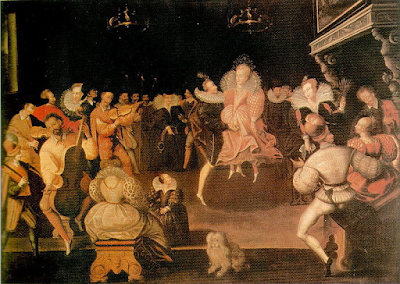 Queen Elizabeth I of England dancing the volta with Robert Dudley Earl of Leicester
but if you're writing verse then it's a twist or turn in subject or meaning or point of view. It's when you're saying something like: the day is dull, dreary and dismal [volta] but I am dazzled with joy because of you.

You can have a volta in any kind of verse, but the term is usually used when you're talking about fairly rigid verse forms, notably the fourteen-line sonnet.

In a Petrarchan sonnet, where you have a rhyming scheme that presents you with a chunk of eight lines followed by six more, the volta will happen at the beginning of those last six lines. In a Shakespearean sonnet, which has three groups of four lines followed by a final two, the volta will probably occur at the beginning of that last two-line couplet.

Here's an example of one of Shakespeare's sonnets (Shakespeare wrote, um, Shakespearean sonnets):

That time of year thou mayst in me behold
When yellow leaves, or none, or few, do hang
Upon those boughs which shake against the cold,
Bare ruin'd choirs, where late the sweet birds sang.
In me thou see'st the twilight of such day
As after sunset fadeth in the west,
Which by and by black night doth take away,
Death's second self, that seals up all in rest.
In me thou see'st the glowing of such fire
That on the ashes of his youth doth lie,
As the death-bed whereon it must expire,
Consum'd with that which it was nourish'd by.
This thou perceiv'st, which makes thy love more strong,
To love that well which thou must leave ere long.

Word To Use Today: volta. This word comes from Italian, from the Latin volvere, to turn