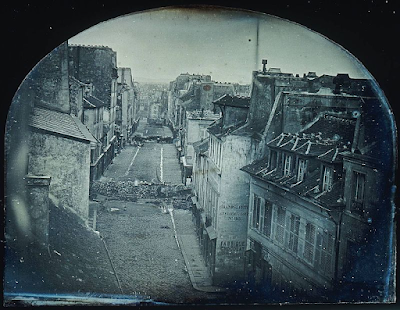 Daguerreotype by Thibault (1830 - 1927)
This image shows barricades set up in the city of Paris in June 1848.
The situation was, basically, that the French king, Louis Philippe, had abdicated in the Spring, and a provisional government had been formed which had set up National Workshops to provide the unemployed with an opportunity to earn a basic wage.
A tax was raised to cover the cost. Naturally this was much resented, and so after a new government had been elected these National Workshops were abolished - and all hell let loose.
There were massive protests. The National Guard was called out, and over ten thousand people were either killed or wounded. Four thousand people were exiled to French Algeria.
The uprising was squashed.
This Daguerreotype, above, is probably the very first example of photojournalism. It shows the barricades before a clash between the protesters and the National Guard.
Was this the beginning of the end of human conflict?
No.
Was it the beginning of a more carefully limited kind of fighting? It's hard to believe it.
But perhaps things would have been even worse without these witnesses to war.
Word To Use Today: barricade. This word comes from the Old French barriquer, to barricade, from barrique, a barrel, from Spanish barril, barrel.
Posted by Sally Prue at 00:30